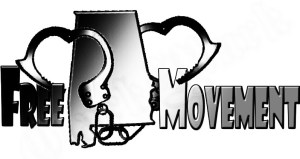 FREE ALABAMA MOVEMENT has chosen the Non-Violent and Peaceful Protest strategy of “shutdowns” / work stoppages to combat the multi-billion dollar Prison Industrialized Complex that has incarcerated over 2 million people for the sole purpose of exploitation through free labor, private prisons, exorbitant fees, and more.

The D.A.’s, the parole board, legislatures, and so-called victims advocacy groups and business interests have told the public that the reason we can’t earn our freedom is because we are violent. Well, not only will we continue to demonstrate that we are Non-Violent, but we will also continue to demand that we be afforded access to Education, Rehabilitation and Re-Entry Preparedness so that when we are released, we can make a positive contribution to society.

Also, we have chosen Non-Violence and Peace because there is nothing violent about telling a State that we do not wish to be forced into decades of free labor and be exploited, abused, raped, and beaten in the name of Corrections.

Beginning on January 1, 2014, F.A.M. organized “shutdowns,” or non-violent work stoppages at Holman and St. Clair Correctional Facilities, where over 2,300 men engaged in non-violent and peaceful protests for the Civil and Human Rights.

The ADOC, which lost millions in lost labor, over-time pay, was exposed by clandestinely filmed videos and pictures that were posted on F.A.M.’s website, YouTube channel and Facebook, as a quagmire of inhumane living conditions, lack of educational and rehabilitation opportunities, and
disproportionate Black men/youth incarceration at historic levels.

We are currently seeking to establish unity with the following states:
Florida, Georgia, Louisiana, Texas, California-Washington, and Illinois, but we are ready to accept anyone who is ready to organize right now, in any State.

The “FREEDOM MOVEMENT”, which is THE NATIONAL MOVEMENT AGAINST MASS INCARCERATION AND PRISON SLAVERY, must be led from the inside.

4. Failure of the Prison Industrial Complex

Instead of being a place for corrections, the ADOC has been turned into system of capitalism, where thousands of poor, uneducated, and disenfranchised citizens are being forced into labor to support a multi-billion dollar Prison Industrial Complex.

In order to fuel this billion dollar enterprise, which includes prison slave labor, expensive phone rates, court fines and fees imposed of people with no income, co-pays, copying costs and more, the ADOC currently has created the most overcrowded, underfunded, and understaffed prison system in the U.S.A., with over 30,000 humans packed into space designed to hold 13,500.

These prisons have vermin infestation, roaches, diseases like HIV, TB, Hepatitis, and more. And, the people being held in these conditions are being forced to live, work and produce billions of dollars-worth of labor, fines, and costs, while having no control over when they will ever go home again.

5. Our Prison Labor is really Slavery

F.A.M. demands a change in all of these conditions and the laws that authorize them, and more (please see our “FREEDOM BILL” on our website, Freealabamamovement.com) and we call on the Family, Friends, Loved Ones and supporters of those incarcerated, to assist us in ending mass
incarceration and prison slavery in Alabama and anywhere else that it exists in the U.S.A.

Join us and start a Chapter in your State today.

WHY WE ARE PROTESTING

1. To Put An End To The System Of Free Labor Within The Alabama Department Of Corrections.

2. To put an end to the inhumane living conditions under which Alabama prisoners suffer, including overcrowding and the warehousing of large amounts of people for no purpose other than exploitation and free labor.

3. To abolish capital punishment and life without parole sentences, and to overhaul Alabama’s current parole system to provide more deserving people with an opportunity to earn their release from prison.

4. To put an end to arbitrary laws and sentencing practices that has resulted in the targeting of specific race groups and disproportionate sentences.

A FULL LIST OF OUR DEMANDS FOR CHANGES THAT WE DEEM NON-NEGOTIABLE CAN BE FOUND IN OUR “FREEDOM BILL” FOR EDUCATION, REHABILITATION, AND RE-ENTRY PREPAREDNESS.

1. We want an end to the system of free labor within the Alabama Department of Corrections.

2. We want to end to the inhumane living conditions under which Alabama prisoners suffer, including overcrowding and the warehousing of large amounts of people for no purpose other than to extract free labor.

3. We want improvements in healthcare, a proper and balanced diet, and more control of our resources and the money our families send to us.

4. Reform in youthful offender law so that children will no longer be sent to prison for crimes committed beginning at 14 years of age.