e. “Fam. I tried to call!!! They in lock up jumping in folks for shit!!! Get them to start calling up here!!!! They sparging that shit and we can’t breathe!!”

FREE ALABAMA MOVEMENT urges all to contact Governor Bentley and the Commissioner’s Officer and demand that the media bad public representatives from Mother’s and F.A.M.ilies be allowed immediate entry into this prison along with DOJ investigators.

The William C. Holman Correctional Facility was constructed in 1968 and 1969. The facility was officially open in December, 1969, at a cost of five million dollars.
The first prisoner was received on December 15, 1969. The Holman Correctional Facility houses Death Row inmates and is the only facility in the state that carries out executions.
The present population of Holman C. F. consists of minimum through closed custody inmates, including life without parole and Death Row inmates.
The living quarters have a total capacity of 998 available beds. There are 630 population beds with Housing Units A-D having a capacity of 114 each and Housing Unit E with a capacity of 174.

There are 7 infirmary beds. There are 200 segregation unit beds and Death Row has a capacity of 194 for a total of 1031 beds.

Holman is located ten miles north of Atmore, Alabama, just east of Highway 21 on Ross Road. The perimeter of the security compound is surrounded by two fences. The inner fence is taut wire fence with the outer fence being chain link. The compound has six towers and two perimeter vehicles, which operate twenty four hours a day.

During the hours of darkness, the perimeter is fully lighted. Thecountryside in the vicinity of Holman prison is farm and timberland. The main crops are cotton and peanuts.
Located directly behind the facility within the security compound is an industrial area consisting of a Tag Plant where all of the State’s motor vehicle tags are manufactured and a Sewing Factory which makes sheets and pillow cases that are distributed to other state prisons.

In 1991 a new Administrative building was built onto the front of the main prison within the security compound to provide needed Administrative Offices.
In the latterpart of 1995, the entire kitchen and dining area was remodeled and updated. In 2000 a newly constructed, 200 bed single cell segregation unit was put online. *In 2007 the housing units in general population were remodeled with single beds and an updated bath room area.

*The 2007 renovation was the result of a 4 day Work and Hunger Strike,  which included all men in HOLMAN prison. (Kinetik Justice was the Spokesperson for the Prisoners during the negotiations and was ultimately “declared a threat to security “and  when,  then Warden Grant Culliver  attempted to place Kinetik in Solitary Confinement Indefinitely,  Attorney Tiffany Johnson Cole intervened and Kinetik was transferred to St.  Clair C. F. )

Only 7 cars in the HOLMAN parking lot, only 3 officers for Death Row and Segregation, Officer just confirmed that it’s over, as all CO’s are quitting this coming week ~”We’re tired of them playing games with y’all and our lives. It doesn’t make any sense. You be safe Lil Brother.”

Well they told me they had something planned,  now I see what it is.

The Administration has effectively ran their workforce off. Smh 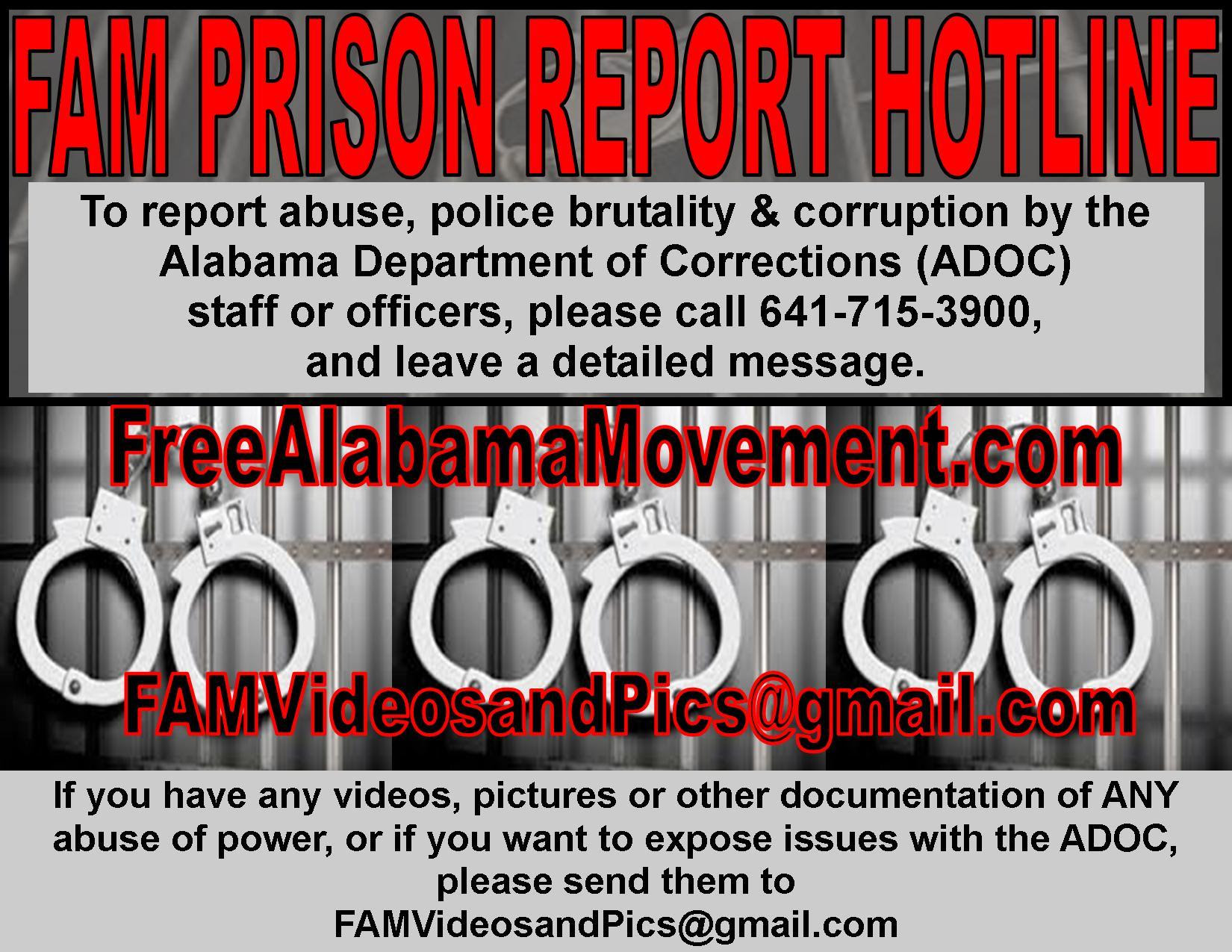 Last night at Holman prison an emergency situation developed as ALL of the officers assigned to the second shift waged a historic work strike for the first time in the history of the Alabama Department of Corrections.

Assistant Commissioner Grantt Culliver was dispatched to the prison, where he then had to order supervisors from another prison, Atmore CF, to report to Holman prison just to be able to serve meals. The officers at Holman, who have been defying ADOC policy and speaking publicly to the media, had communicated their plans to F.A.M. members, and expressed their support for non-violent and peaceful demonstrations against the human rights conditions existent at Holman.

Officers have also complained about overcrowding and the need for a mass release, more education and rehabilitation programs, as well as issues with disease and filth. Officers reserved their harshest criticism towards the Commissioner’s officer and what they perceive as a lack leadership from Commissioner Dunno and Culliver.

A serious humanitarian crisis is developing at Holman prison as correctional officers continue to walk off of the job amid concerns about safety and apathy from Warden Terry Raybon and the office of ADOC Commissioner Jefferson S Dunn, as violence, including deadly stabbings and assaults continue to mount.

Several officers expressed dismay and fear after learning that two of their fellow officers, Officer Brian Ezell and another officer, reported to Warden Raybon that they had knives drawn on them and their lives threatened, and that neither Warden Raybon, nor Commissioners Jeff Dunn and Grantt Culliver would take any action to ensure their safety. Both of these officers then quit.

Several other officers have also quit in the past three weeks after witnessing a stabbing of a fellow officer in the temple and who had remained hospitalized with life threatening injuries until he was pronounced dead earlier today. This after a former warden, Carter Davenport, was stabbed in March amidst back to back riots and other violence at Holman.

Now, after seeing Warden Raybon release approximately 20 people from segregation on September 13, 2016, most of whom were all in segregation for violent incidents (only to see several stabbing take place, including one critically injured and another losing an eye), a total of eight more officers have either quit or turned in their two week notices. Officers are expressing concern that the Commissioners of the ADOC are intentionally exacerbating violence at the expense of human life in efforts to push forward their plan to extort the public for 1.5 billion to build new prisons in next years Legislative Session.

Officers have began to express support for the Non-Violent stance of FREE ALABAMA MOVEMENT and their efforts to expose corruption, violence and other issues plaguing Holman and other Alabama prisons, and have went so far as to make repeated requests to Warden Raybon for the release of F.A.M. co-founder and organizer Kinetik Justice from solitary confinement, because officers now feel that he is being wrongfully detained and because he has repeatedly demonstrated the ability to conduct peaceful demonstrations at Holman prison to bring attention to issues within the ADOC and Holman prison.

We are asking that everyone call Commissioner Dunn and Warden Raybon and demand that they post daily reports of the staffing levels and incidents of violence taking place at Holman as a matter of public safety.

We are further requesting assistance in finding a Human Rights attorney and human rights observers to report to Holman immediately, as the level of violence is skyrocketing, and the men at Holman are left in a virtual war zone to fend for themselves, while officers continue to walk off the job in what is already the most understaffed prison in America. Officers are so afraid to enter the dorms that routine security functions like conducting count are being done by the incarcerated men themselves, and video footage attesting to this fact are widely available online and across social media.

Family members of those incarcerated at Holman are requested to call Commissioner Dunn and Culliver continuously, and demand that their loved ones be immediately removed from Holman, as there are insufficient officers to secure the prison.

​ Police stabbed in the kitchen at Holman. He was transported to hospital but doesn’t look like he will make it.

After receiving numerous phone calls from family members and photographs from conditions inside Holman prison, FREE ALABAMA MOVEMENT and other representatives are calling for federal authorities and Human Rights attorneys to investigate allegations of Human Rights violations taking place at Holman to punish peaceful protests.

Reports indicate that officers are leaving dorms in filth, not taking out trash, leaving showers and soiled laundry unclean, in efforts to punish peaceful demonstrations.

The men in Holman prison also allege that officers are violating their Human Rights by serving inadequate meals and attempting to use starvation tactics in violation of Federal and International law and treatise against Torture through food.

Basic nutritional calories and food portions are not being met.

The men confined at Holman prison are asking supporters to contact the Human Rights Watch, all media, and Human Rights attorneys and request that they come to the prison and begin taking complaints. Living conditions include leaky ceiling with Black mole and other harmful conditions in the showers that are causing infections.

Showers filled with mole and bacteria.

Tarps being used to contain leaks in roof.